Educators have been intrigued by the potential of 3D worlds to engage young learners almost since the idea of virtual worlds emerged on the internet wish lists of the early WWW. I first learned of “immersive 3d” and several projects based on the Open Cobalt platform in about 2008, and I investigated Sloodle, of which all that now remains is the Git repository. When the SMARTboard-friendly Open Cobalt flavour “EduSIM” announced you could import 3D objects from Google Earth I got very excited. I loved models as a kid, and the Google 3d Warehouse was an instant hit, even in its early days.

I soon found a model of the Kabul Museum, which some of you may know was destroyed by the Taliban but later rebuilt. I created a learning activity that was basically a scavenger hunt for images of other historical objects, which it was possible to retrieve from elsewhere in the virtual world and “hang” in rooms within the museum. Great fun and potentially educational—when it worked—but it flopped due to technical difficulties. Immersive 3D was intriguing, yes, but also time intensive, technologically challenging and, for teachers in the classroom, too much work: “…it is not clear that the investment in time in building and using the Virtual World is worth it” (Conole, 2014). Are there other ways to leverage the intrigue models, even virtual ones, hold for many people?

Are aspiring filmmakers nearly as ubiquitous as the cellphone cameras they may be using to get their start? I’ve seen some evidence there are a lot of them, and it’s certainly arguable that multimedia communication is a literacy, maybe an entire set of literacies, important to develop in our digital era.

Are aspiring filmmakers nearly as ubiquitous as the cellphone cameras they may be using to get their start? I’ve seen some evidence there are a lot of them, and it’s certainly arguable that multimedia communication is a literacy, maybe an entire set of literacies, important to develop in our digital era. It may not be necessary or desirable to have everyone in the class “make a video,” but if you have an idea as to how a videographer or three could contribute to an emerging student-driven inquiry, seeking out local experts at the student level might be just the thing—maybe creating an opportunity for student and teacher to reverse roles.

For Sketchup users, says Google, “…drawing is thinking. They draw to explore ideas, to figure things out, to show other people what they mean. They draw because they love it, and because nothing great was ever built that didn’t start with a great drawing.” Making thinking visible is what the best instructors do. They call Sketchup “The easiest way to draw in 3D, and from my limited experience that may well be true. The 3d Warehouse is a repository of models in many categories.

Sketchup can export 3D models as AutoCAD, Collada and several other popular 3D file formats, of which HitFilm Ultimate imports 3. I had the most success with 3-D Studio (*.3ds) files.

Step 1. Explode any groups you want to animate. Before I could select the propellor I needed to “explode” the entire model. 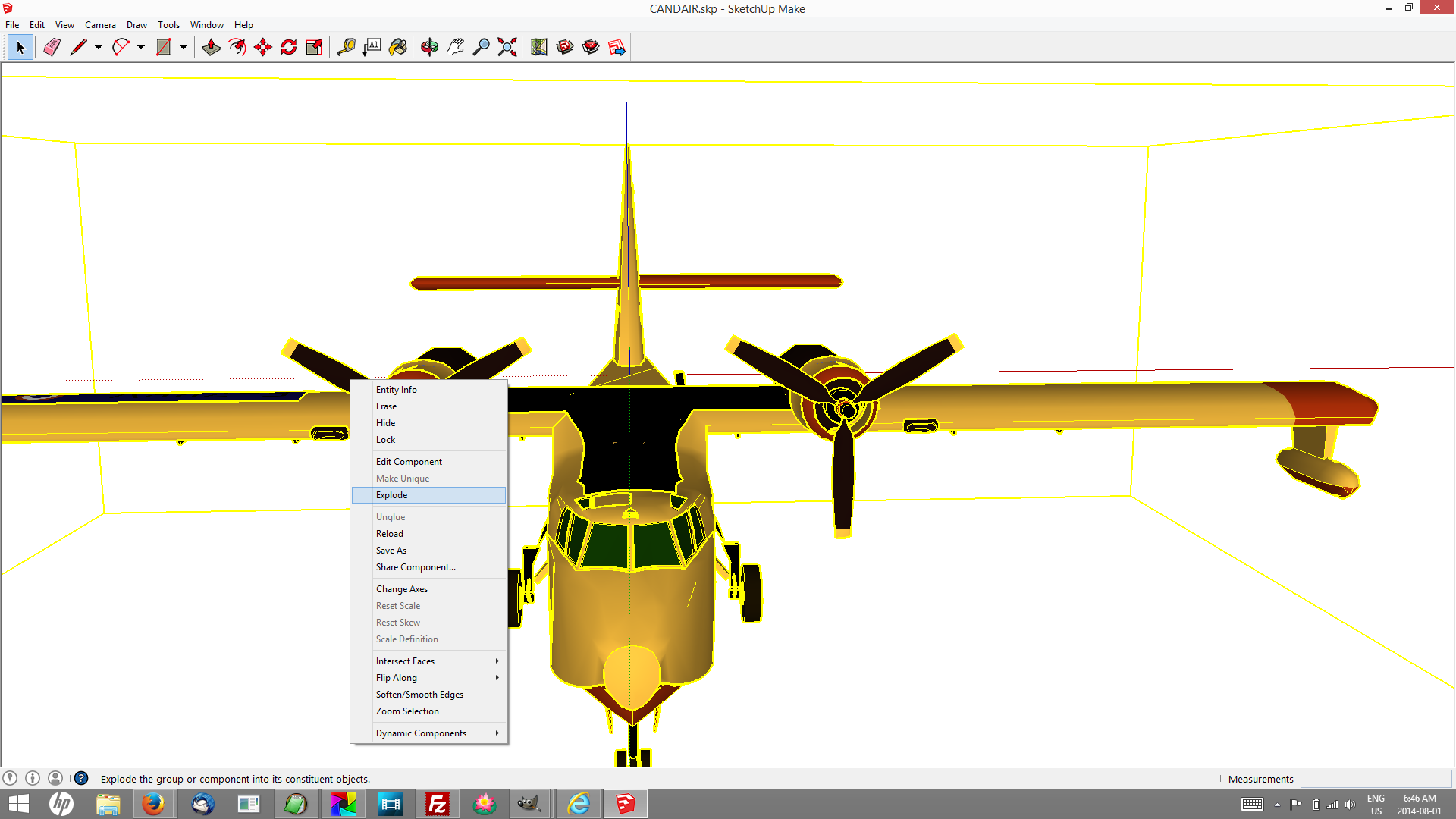 Step 2. Select the things you want to animate. Ctrl+DblClick to add entire objects (will make sense when you try it.) 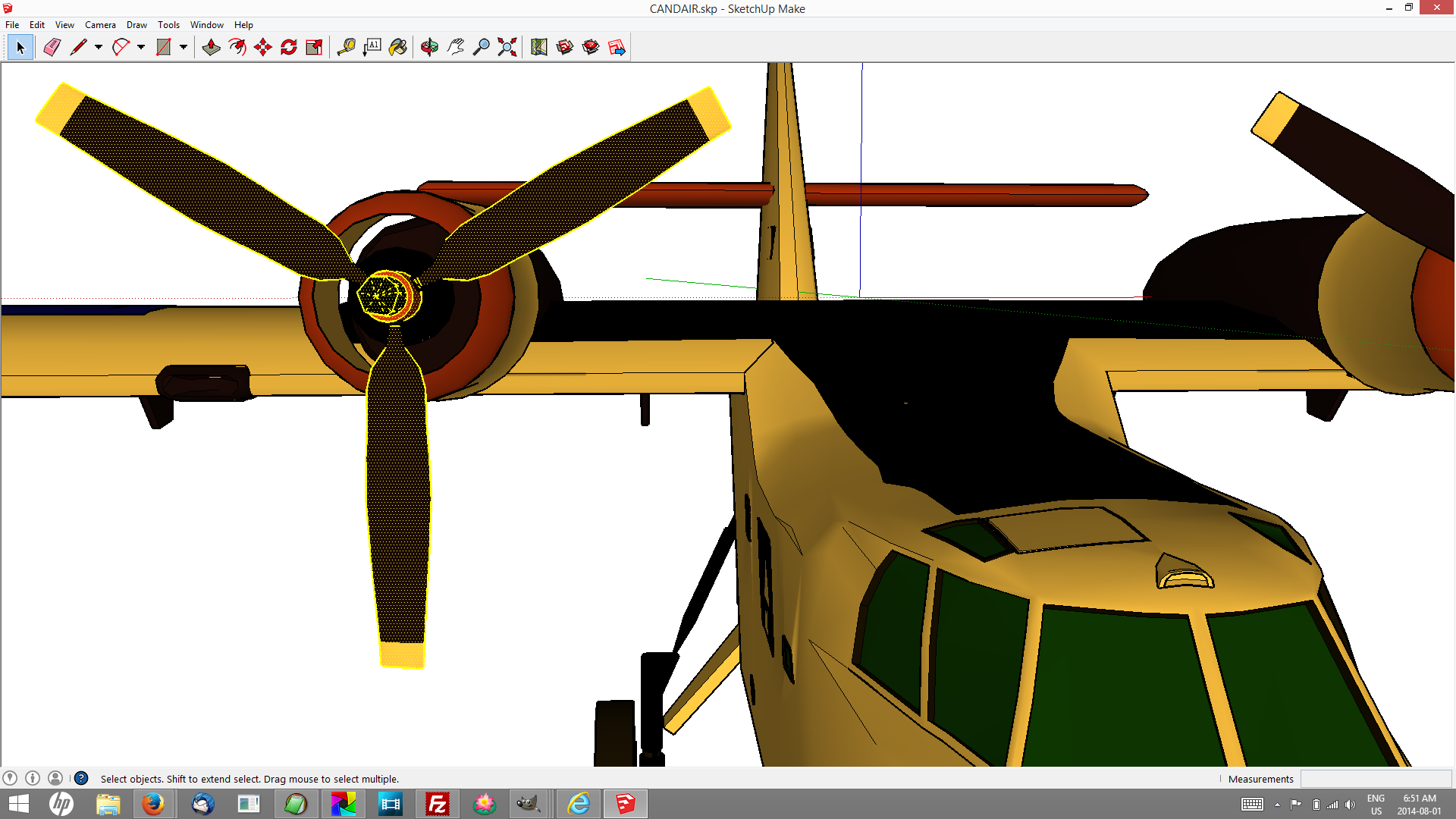 Step 3. Export in a useful format. I had best results with 3DS, but I soon learned to create a folder for every model I want to work with. Some of the other formats do this for you, because if your model is in the least bit complex it will generate many image files, and with 3d Studio files they all end up in the folder you save the master .3ds file. Press Options and check Export only current selection. 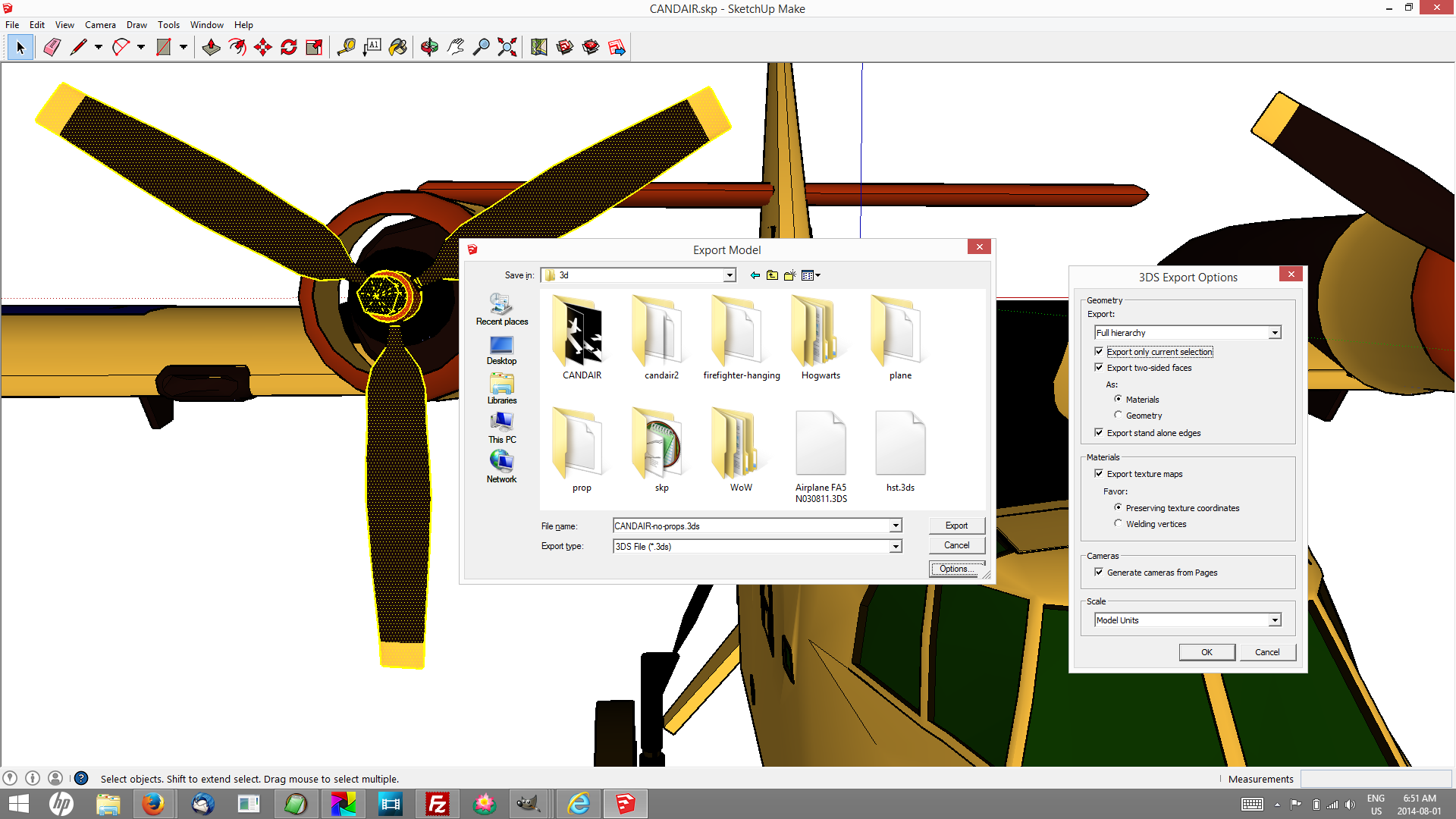 Step 4. Export other parts of the model. 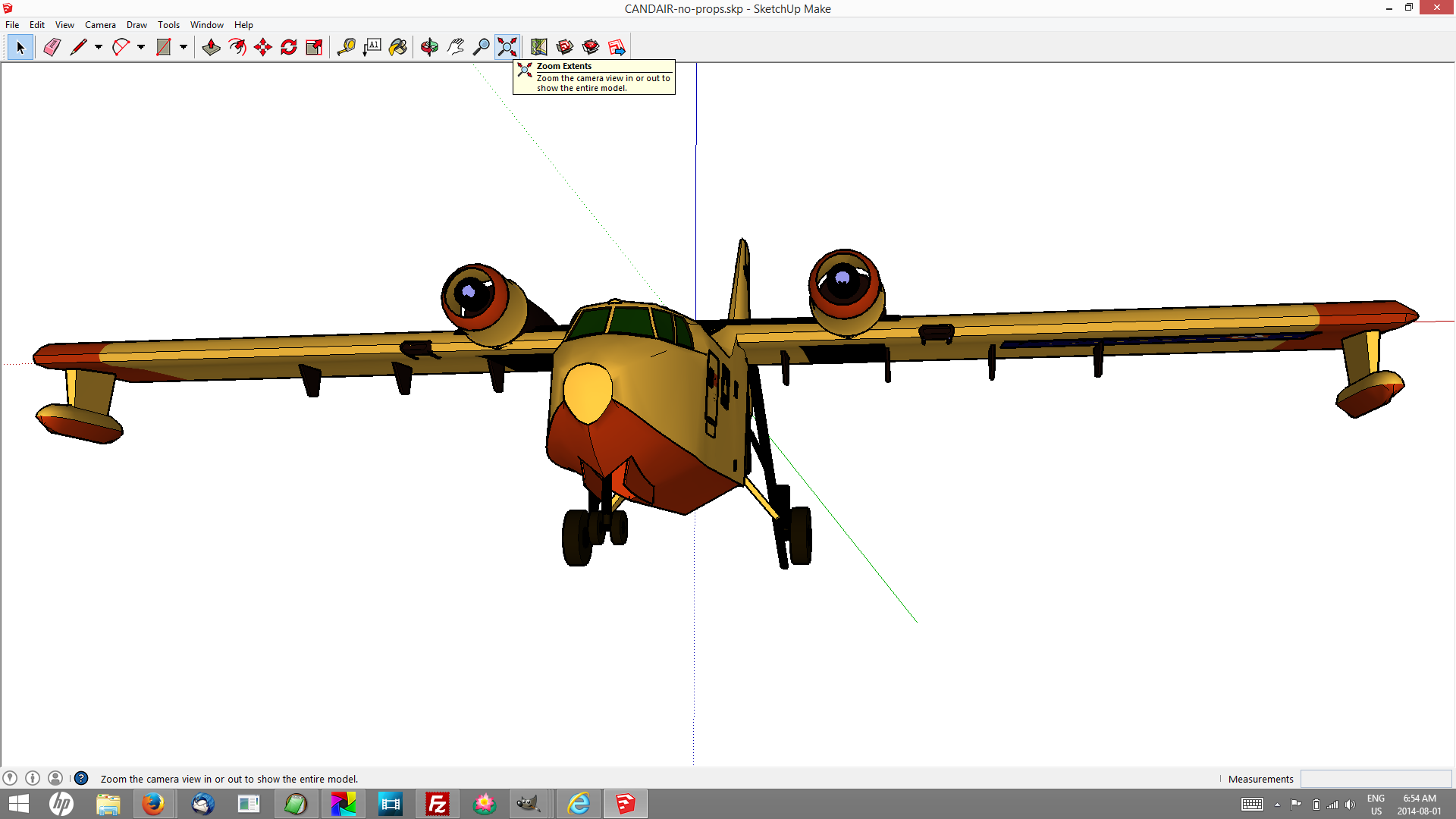 To import 3D models you need HitFilm Ultimate, which costs money. Sadly, in many places that creates a barrier. If that’s your situation don’t give up! Install Sketchup anyway, explore the 3D Warehouse and watch the tutorial entitled “Use Scenes to save important views” which is advertised from the splash screen when you start Sketchup. Read this, and turn kids loose, let them teach you how to use Sketchup to make animations and then use whatever editing software you may have access to (iMovie? Windows MovieMaker?) to put them together in meaningful sequences. You can still use green screens place themselves right in the action.

I was introduced first to HitFilm 2 Express, which does not do 3d, and came bundled with Sony MovieStudio Platinum, essentially buy-one-get-one-free. I found the $150 very reasonable considering what the two can do together, and within several months I was offered an upgrade deal too good to pass up — 70% off the full cost of Ultimate. The Sony is far and away the better editor and renders movies on average 3 times faster than HitFilm, but unless you can spring for top-of-the-line Vegas you’ll still need HitFilm’s compositing tools and effects, not to mention text styling and animation. If you use a green screen (and you will) you’ll especially need the masking tool.

You’ll find [3D Model] on the media import dropdown menu. It analyses the model file and then displays what it found in a 3D Model Properties dialogue. 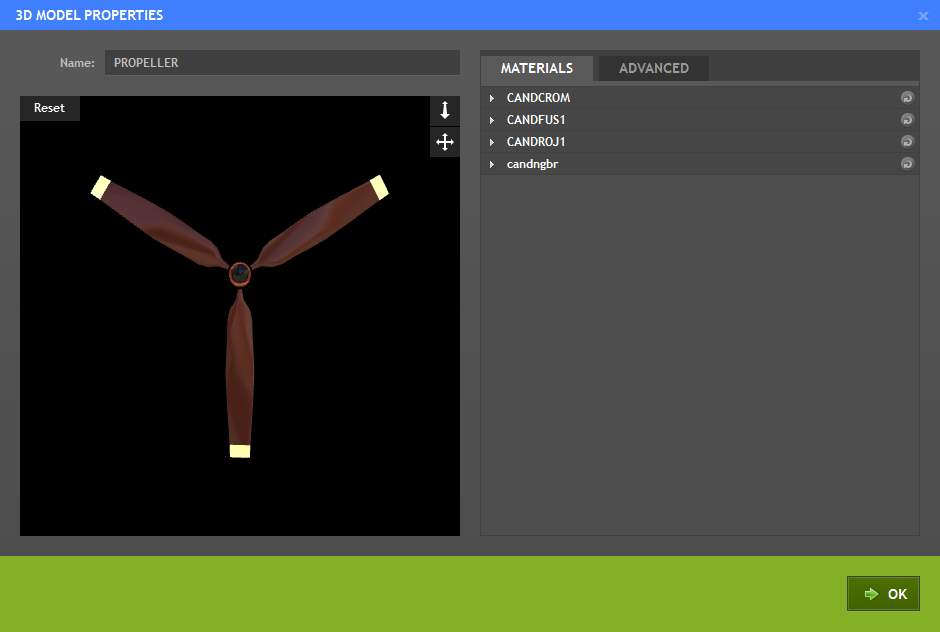 Propeller extracted from Model: FRANCE CANDAIR by XALOC-SOLARIS. HitFilm Ultimate offers an opportunity to tweak the “materials” of each piece of the 3d object.

Animating literally dozens of available parameters is straightforward, designating a “parent” layer and attaching “child” layers only slightly more difficult (‘cartoonish’ is just fine with me for now!) Sticking to scale, position, orientation, transparency and zoom are probably more than enough to have some fun creating your own 3d worlds. 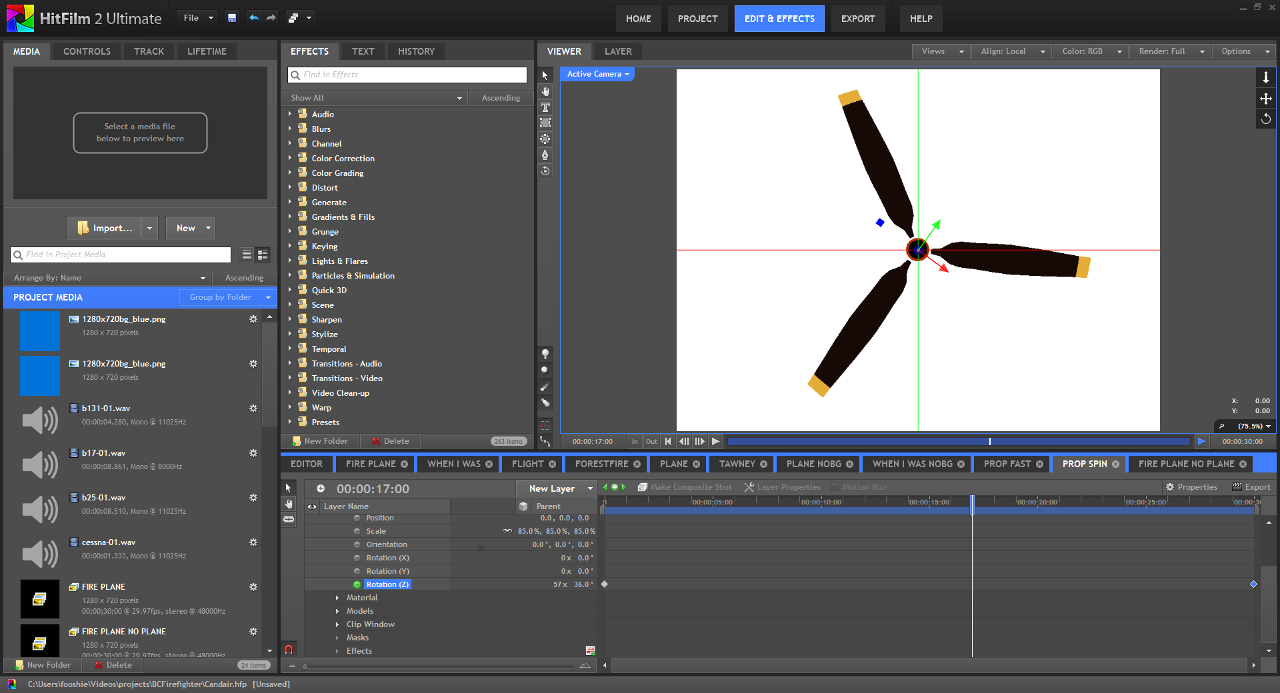 I duplicated the propeller composite and tried some other effects 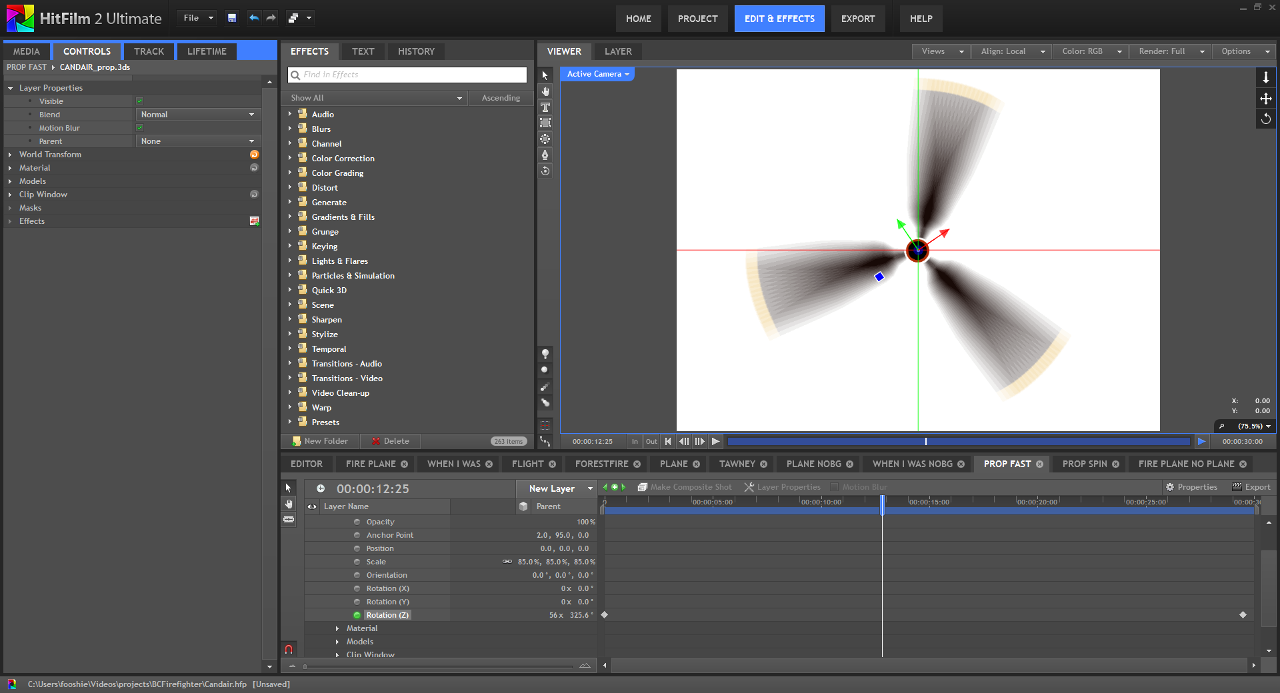 Layer properties include a motion blur that enhances this animation.

Putting Humpty together again was a challenge at first, and in the end I think a reasonably good way to get started learning HitFilm’s layers, views and tools. 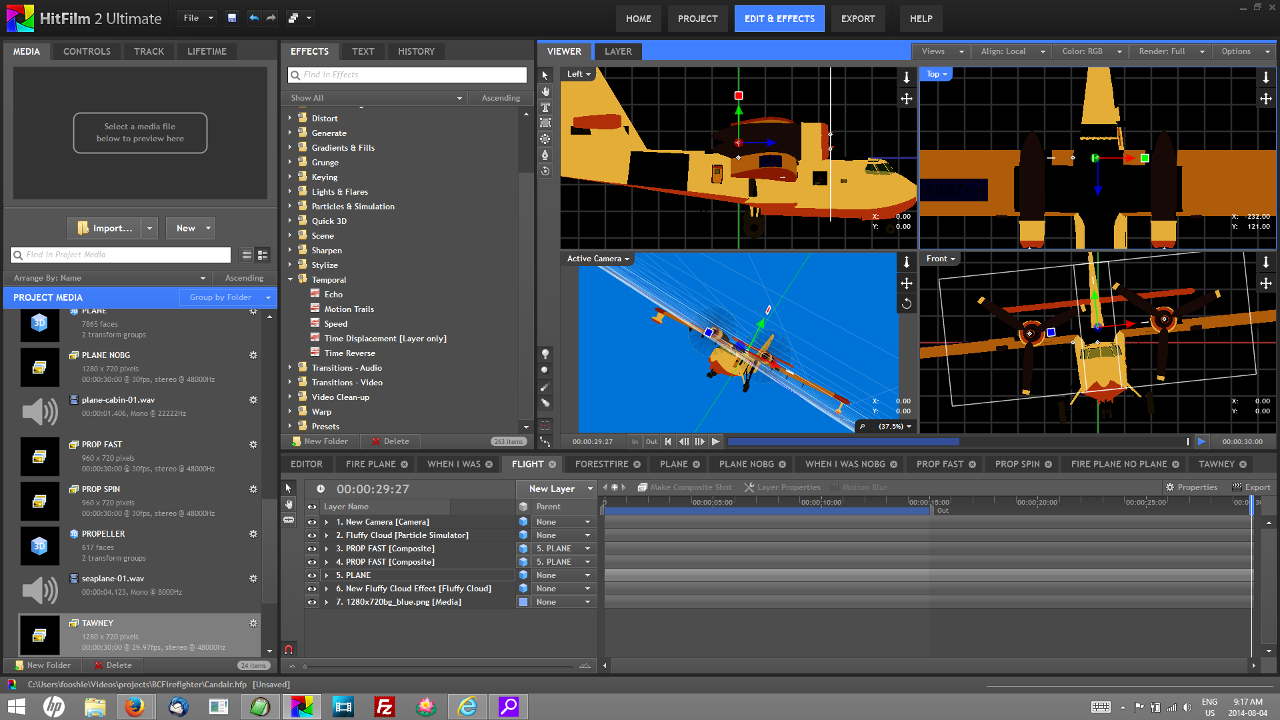 HitFilm workspace split in 4 views showing lining up of propellers.

The way compositing works, this project isn’t necessarily a wrap when you render the day’s creativity. I can spend some time on the script, bring in actors and create variations on “the cargo bay scene,” and when I return to render the “fly by” it will have updated.

The airplane engine came from the repository at www.mediacollege.com.