Dignity and respect. Self-esteem, “worthy” of being treated well, honoured for contributing fully. How can we convey those things? How can we teach them? Is there an opportunity here for a picture that’s worth a thousand words?

I’ll attempt to walk the class through a visual encounter with dignity, the role of the Blues before and after emancipation, the Robert Johnson “Crossroads” legend … and write some Blues. Musically, we’ll reinforce our counting, continue driving home the 12-bar form, figure out I-IV-V in additional keys. We’ll master some new chords—and write some Blues around the 2+1 structure of a traditional Blues lyric.

I’ll ask what they already know about dignity, and whether the people in photos have it … how do they know?

Dignity: Being treated with respect, regardless of the situation, and having a sense of self-esteem e.g., having a sense of self-worth; being accepted as one is, regardless of age, health status, etc.; being appreciated for life accomplishments; being respected for continuing role and contributions to family, friends, community and society; being treated as a worthy human being and a full member of society.
—OHRC 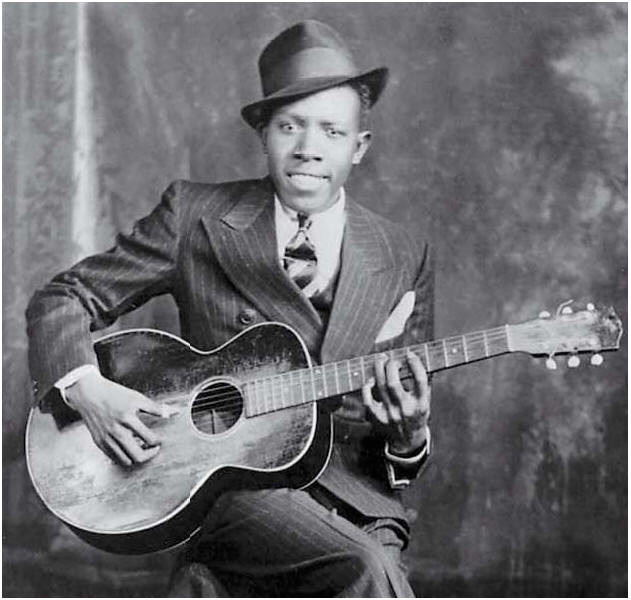 The last image I’ll show is Robert Johnson. What’s he wearing, how’s he sitting, what’s he got to be so proud of? What if the suit, hat, guitar and a few more clothes—enough to fill one suitcase—are all he owns, and he carries it by bus and hitchhiking from town to town along dirt roads?

We’ll stand and do some “dignity awareness studies.” We’ve already beat our chests with the swing video; this will be introduced in similar fashion. These can be posturing and funny at the start (it’s likely somewhat related to rock star posing) but I need to bring back seriousness and wrap it up … ultimately the point is to try to feel increased confidence and self worth associated with feeling dignity and recognizing that of others.

But wait, there’s one more association to make. I’ll promise to tell them the Legend of the Crossroads after a movie clip. We’ll watch the first 3:20 of Does it Swing? An Introduction to Swing Jazz for Young People (Part 1), to where it talks about slavery and the blues. (I’ll stop it before Basin Street Blues which will watch if there’s time at the end, and learn next visit.) We’ll reflect on that briefly and then take out the ukuleles to learn some Robert Johnson tunes.

Robert Johnson and the Crossroads Blues

For more links and resources please see this concept map

DIGNITY for the Seventh Generation Coming

One thought on “The Blues and human dignity”