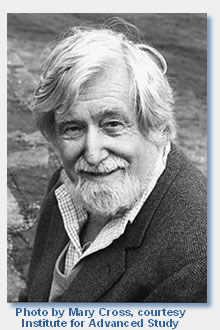 Clifford Geertz knew how to make people understand the importance of symbols and the way they “map,” as we say, to other pieces of the human condition. “Thick” descriptions don’t stop at describing clothing, or the actions being performed in a ritual. “Thick” descriptions try to get to the meaning of the clothing and gestures within the culture and context, to convey the impact the ritual has on the life of the ritual performer.

…between what Ryle calls the “thin description” of what the rehearser… is doing (“rapidly contracting his right eyelids”) and the “thick description” of what he is doing (“practicing a burlesque of a friend taking a wink to deceive an innocent into thinking a conspiracy is in motion”) lies the object of ethnography…
—Clifford Geertz (in Denzin & Lincoln, 2003, pg. 147)

His colleague Robert Darnton recounts an example of the power of Geertz’s thick description:

…I enumerated esoteric details about the connections between cardinal directions, color symbolism, and mythological motifs. By the time I got to initiation rites, I realized that everything was falling flat. I was making a worldview sound as mechanical as the directions in a tool kit.

At that point, Cliff intervened. He described the scenario. Adolescent boys sleeping in the familiar comfort of their beds are awakened unexpectedly in the middle of the night. They are dressed in a ritual breechclout (a kind of loincloth) covered with a blanket and made to climb down a ladder into a windowless antechamber of a kiva, the deepest, most secret room in the pueblo. Then they are told to shed their blankets. A terrible thump occurs over their heads. Elders cover the ladder with a blanket; and when they remove it, there stands the chief deity in a terrifying mask. He announces that he has come from his dwelling place beneath the lake and asks the boys if they are prepared to be “finished” as men. After they agree, he flails their bare torsos with a yucca whip, striking with all his might and raising huge, red welts on their rib cages. Finally, when they are reduced to terror, he pulls off his mask, and they see the face of a relative or neighbor laughing at them.

…Like all the students, …It made me think of the child who pulls the beard off the department store Santa Claus.…

Not at all, Cliff explained. The boys had learned that uncle x was a god, not that a supposed god was only uncle x. Suddenly we were staring into strange territory.

As a teacher, Geertz delivered equally thick learning experiences. He was everything one might expect from the somewhat dishevelled, “Beware! Genius Inside” look he’s said to have sported (Darnton, 2008, par. 12).

Cliff had the students dashing around the hermeneutic circle like runners stealing bases. … as a teacher, he was exhilarating. When his eyes lit up and the words poured out, he infected students with the excitement of the chase. They, too, could penetrate another world. The game was difficult, but anyone could play. And in Cliff they had an example of a hunter-gatherer who blazed his own trail through the jungle of cultures.
—Robert Darnton

It’s my experience that mind-mapping software, specifically Compendium and VUE, and their promising offshoots CompendiumLD (Learning Design), CompendiumNG (Next Generation?) and designVUE (VUE with Issues Based Information System support for dialogue mapping to solve wicked problems, available in Compendium but not the original VUE) have great capacity to help those who make learning situations, make them “thicker,” in the Geertzian sense.

Which one should I use

Well, the short answer is, I still use both. I’ve gravitated towards CompendiumNG in recent days, but I’ve also seen that designVUE’s a powerful presentation tool. The designVUE site says, accurately in my opinion: “[designVUE] enables users to capture sources of inspiration, integrate supporting evidence and visualise design decisions.” When I did my major research project last spring I found Compendium’s Web export to be old-fashioned looking but rock solid, and VUE’s to be wonderfully true to the original but including some types of information, HTML code for example, broke the output. designVUE adds Compendium’s ability to nest maps in creative ways, which is a benefit to me, but I’ve noted not all keyboard shortcuts available in the parent VUE seem to be hooked up in designVUE. CompendiumLD has icons and stencils specially for Learning Design, and CNG has a sleek updated look with very mature toolbar, workspace, almost an IDE? for learning design.

I’ve written here about student mind maps as classroom exercises, here about VUE and designVUE’s amazing non-linear presentation abilities, and my preliminary exploration of CompendiumNG here. I’ve written about mind mapping in general here, here, here, and here, and I intend to write much more about all 5 of these programs as I continue to use them and apply them in my own work—planning lessons and doing storyboards are among the things I’m trying. I wish I could put together all the best features of all 5 strains of Compendium and VUE. In the meantime any of them can perform similar basic concepts, you just have to adapt slightly to each tool. Here’s a 52-second presentation showing just one novice’s approach (mine) to a project design using CompendiumLD. I hope it’s enough to intrigue you to explore further.

Some features and benefits of CompendiumLD for project design

This is an HTML5 audio player I made that synchronizes the display of images and text to audio or video. Press play. I apologize for the audio quality, I’ve been having some problems with my setup… I used Audacity to remove noise and other problems, but wasn’t able to completely “fix it in the mix.” 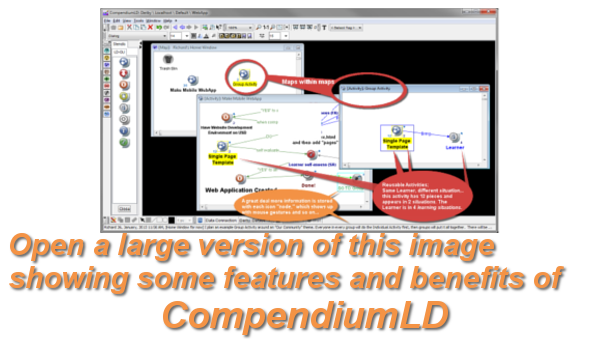 Darnton, Robert (2008) From the In Memoriam column of the February 2007 Perspectives, This essay first appeared as “Cosmology in the Classroom: Fieldnotes on Clifford Geertz,” in the New York Review of Books, January 11, 2007. It is reprinted with permission [HTML].