VUE, and its design-centric extension, designVUE, are concept-mapping tools with rather extraordinary superpowers. In fact if you think they look like simple tools for making mind-maps I’m here to nudge you to take a closer look. 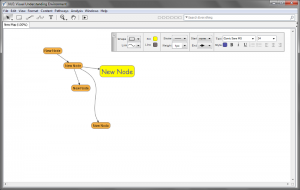 Does quickly and invisibly making your content “more accessible, interoperable and valuable” sound good? Have you heard of “…Web 3.0, the Semantic Web or the Giant Global Graph…?” These two well-connected apps support OpenCalais and other meta-data helpers.

While the VUE site is essential for resources and documentation, I recommend installing and using designVUE. Even if you don’t use IBIS argumentation, what they refer to as “bi-directional hyperlinking between files,” known elsewhere in designVUE as “wormholes” (and in Compendium as “transclusion,”) or the ability to place one map within another, is a powerful ability that separates tools like VUE and Compendium from the plethora of mind mapping tools available.

That’s what I’m learning first—the built-in presentation tool. There’s not much more I can add about it at this point than what’s in this rather comprehensive overview/tutorial (more overview than tutorial, maybe?), so with no further ado…

I seem to be able to screen record these presentations with another open source program, so if that pans out I’ll share it then. I think it’ll definitely take some practice thinking about presenting in a different way, but there’s a great deal of evidence that idea maps, visually connecting the dots, and the activities such as argument mapping that are associated with them a) may have a natural fit with social networks and social learning, and b) organize data in ways consistent with the human brain (see for example Conole & Fill, 2005 and its extensive reference list).

designVUE is a branch of VUE. It is an open source project based in the Design Engineering Group of the Mechanical Engineering Department at Imperial College London.

Calais Marmoset is a simple yet powerful tool that makes it easy for you to generate and embed metadata in your content in preparation for Yahoo! Search’s new open developer platform, SearchMonkey, as well as other metacrawlers and semantic applications.