LilyPond is open source music engraving software. LilyPond “…was designed to solve the problems we found in existing software and to create beautiful music that mimics the finest hand-engraved scores.” It produces some of the finest looking scores you can imagine, and almost any style of note or notation you can imagine. But it’s a scripting language—which for many people makes it very difficult to learn, and much too tedious to use. Enter Frescobaldi.

Frescobaldi is an open source editing tool for LilyPond. I won’t pretend there’s no learning curve, but if you want to print absolutely stunning music scores and enjoy learning technology it’s worth it, and I’ll help you get started. And if you’re a music educator I’ll make some suggestions about how I might use this in teaching, albeit at a high school level or higher, with students who have already learned the basics of reading. Thanks to Frescobaldi’s built-in MIDI player I see applications to ear training, as well as more obvious help with general notation problems. I’ve also screen-recorded some of my first explorations, and I intend to edit them down and add audio, and continue with a video tutorial, hopefully in just a few days.

Both programs run on Windows, Mac or Linux, but there’s no Mac or Linux installer for Frescobaldi, so if you’re not running Windows you may need some extra skills there. First, download and install both programs using the links below. You will not need to launch LilyPond. You’ll launch Frescobaldi, tell it where to find LilyPond and Frescobaldi will take it from there.

Frescobaldi is a LilyPond sheet music text editor. It aims to be powerful, yet lightweight and easy to use. Download

To get started I just picked 8 bars of a Stevie Wonder tune I happened to have loaded in iTunes. You can see the first 2 bars of the lick on the right of the screen shot below. The script on the left side, which you’d have to write from scratch without an editor, demonstrates rather aptly I think, why a tool like Frescobaldi can likely make LilyPond more useful to a much larger community. What will be much easier to demonstrate in a video tutorial is how I copy/pasted a snippet of code from the documentation into the editor and then tweaked it until I got what I wanted. The notes you see on the right are formed entirely by this part of the script on the left. 'is' as a sharp is not intuitive (unless you speak Dutch), but now that I’ve told you perhaps you can see the 4, 8 and 16 that sets note values, ‘r’ for rest, and the lower case note names, key of B Major. The tildes (~) create the ties, and I entered staccato and accents using the Quick Insert tool shown in the left panel of the final screen shot below. All your music goes immediately after the % Music follows here. and before the closing curly brace (}) that lines up flush left with the instrument name above it and the code \score below it (see both screen shots beneath the following code snippet). 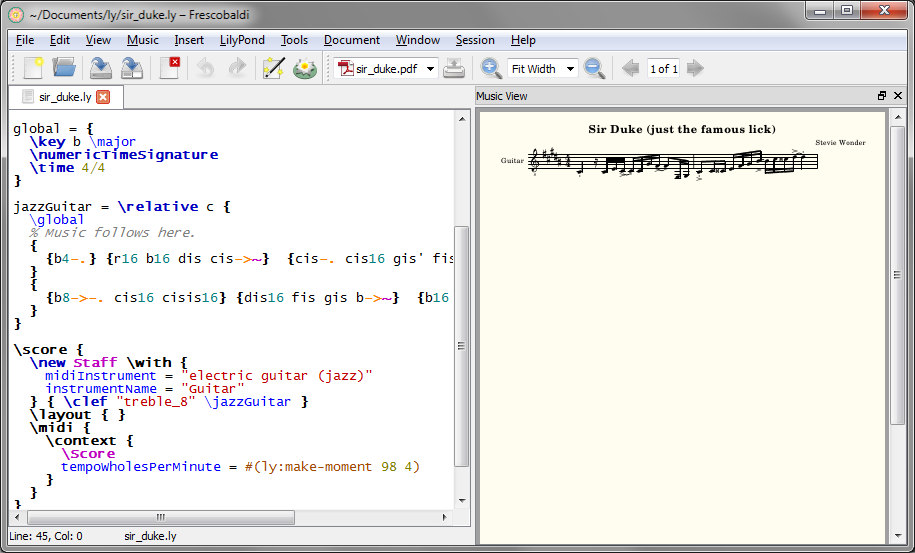 By the time I’d finished I’d opened the MIDI Player to check my work. You need to press the Engrave button to refresh the output on the right (there are further options under the LilyPond menu). Frescobaldi supplies the bar lines based on the time signature in the score settings, and plays audio—I feel those two facts have pedagogical implications. I slowed down my 8-bar passage using Audacity, played them side by side, and by refreshing the output was able to see and hear what I had right and wrong along the way. 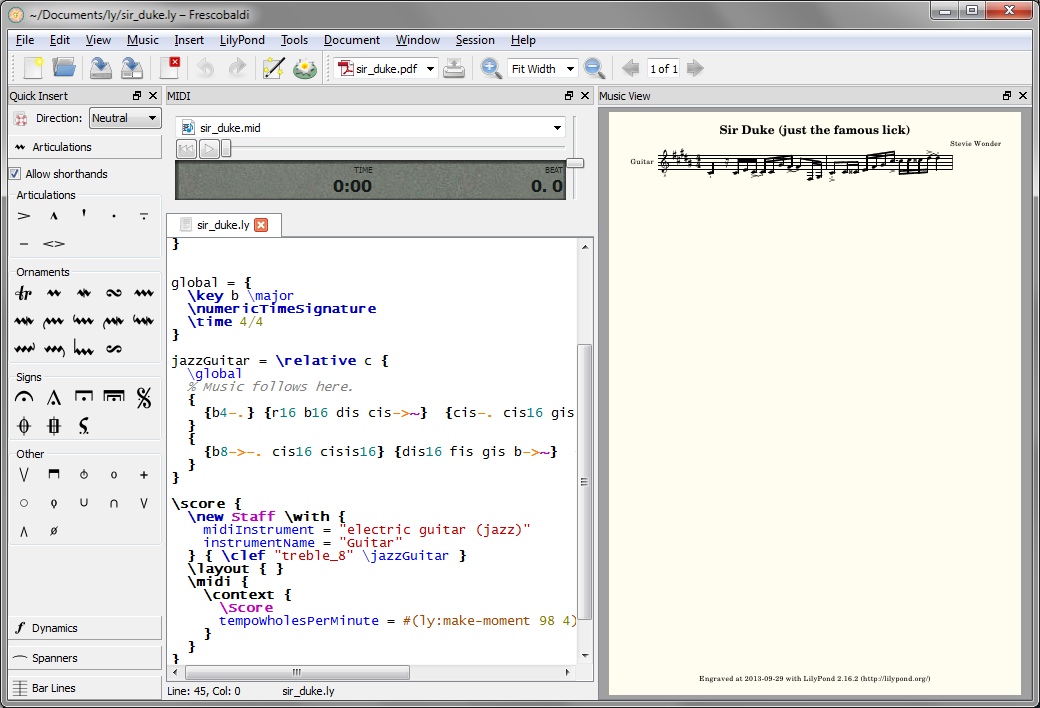 I hope this is enough to pique your interest. There’s another LilyPond editor I plan to try soon too, Denemo, highlighted with even more on the LilyPond site. It looks quite sophisticated, but I can tell I’ve barely scratched the surface of Frescobaldi, which was intuitive enough out of the box to keep me intrigued and progressing—getting this far was fun! Please use the comments section and stay tuned for some video tutorials as I get in further.

Richard studied as a teenager with Trevor Payne at John Abbott College and attended Berklee College of Music in Boston. He has performed across Canada with full-time rock bands since the early 80s. He’s been a teacher of rock, jazz & classical guitar at the now defunct Toronto Percussion Centre, and at The Arts Music Store for many years. He holds the degrees of Bachelor of Fine Arts Music (Special Honours), Bachelor of Education, and Master of Education from York University, plays guitar and trombone, and taught grade 6-8 band at the Toronto District School Board and North York School Board.