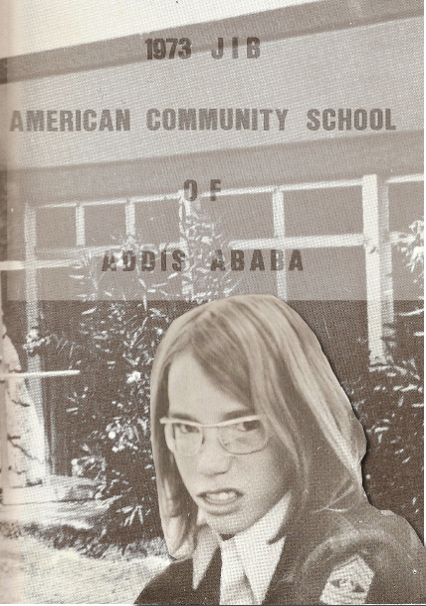 It was the 1960s. My father was teaching physics at Lehigh University, Bethlehem, Pennsylvania, USA. When presented with an opportunity to make a career decision, my Dr. Spock-influenced father and mother, a teacher of special ed, called a family meeting where my younger sister and I agreed we’d like to go on “a family adventure.” Embracing that fun-sounding idea ultimately led to us packing up, selling the house and cars, and moving to Addis Ababa, Ethiopia, for 4 years. It ultimately led to an experience that has shaped my outlooks the remainder of my life.

Think of what I’ve told you already about my family: I had two parents, living under the same roof, which they owned. They were both educated and worked full time, and had leisure time to read parenting books; or to take us to lessons, or to help us do our homework. They raised us to be tolerant and provided opportunities that built on the opportunities that had benefited them. We ate dinner and watched Walter Conkrite afterwards as a family. I saw Mayor Daley and the Chicago riots in the presence of the whole world but also my uncles—who attended Columbia & Yale—overheard economics at the table with my grandfather, the Dartmouth-educated banker. In fact both my parents, all their siblings, and all 4 grandparents† had post-secondary degrees. And whether they voted D or R, they had all experienced the Great Depression and/or grown up with the optimism—and all the benefits—of the New Deal.

Living in a bubble

Addis Ababa, Ethiopia, is as cosmopolitan as any of the world’s great metropolises. Photo: Tourism Ethiopia

Growing up in the American northeast in such a family in the 1960s, I have to admit I acquired and was slow to shake the mistaken idea that all Americans believed and behaved similarly. I’d heard of “backwards” politicians like George Wallace, and I understood that Martin Luther King was murdered, at least in part, for his belief in the equality of everyone. Nonetheless, my experience attending American schools with Americans living in Ethiopia involved from the start a certain “reverse culture shock.” Contrary to its expected coincidence with my return to North America, I see now this reverse culture shock began the moment I encountered Americans from other parts of the country abroad.

When one or two adolescent attention seekers said outrageous things, most of us agreed they were just being obnoxious (for example, heard said some by some American children while living in Africa: “…Aah don’t believe in segregation Aah believe in slavery… the South will raaaz agin!”). Occasionally they did things completely reprehensible and devoid of empathy, utterly bereft of respect for self or others—such as the classmate from a Southern state who arrived to an African-American teacher’s classroom on Student Spirit Week “Favorite Character” day brazenly wearing a white sheet and hood—the overwhelming majority considered them meaningless rants or stupid, immature stunts. And so they were. But the fringe was already very busy commandeering the narrative, and back in the U.S. of A. such emotions were being stoked. People who shared these views were their ready willing receptors. And among them were many who might donate money and vote. Nixon was president, and Kevin Phillips was constructing Republicans’ Southern Strategy.

Thanks to the inquisitiveness and independence I was instilled with I dismissed unexpected (and unexpectedly strong) peer pressure to take French, and instead I learned to speak, read and write Amharic1. My sister and I never referred to our hosts as “Ethies,” as some other kids did, and when it felt safe to do so (for there were uncomfortable times when the offenders were in the majority or in positions of supposed authority) we admonished those of our “Ferenji” peers who used the generally derogatory term.

Many people don’t want to hear this kind of tough love, of course. They’d like to bury their heads in the sand and pretend that all white children are as sweet and harmless as Taylor Swift. But the reality is that the statistics tell a different story.
—Cord Jefferson, gawker.com

I believe that misrepresenting moral courage, introspection, and constructive self-criticism as “White Guilt” is self-sabotage by those who do it. I recount 3 easy examples from different periods in my own life, but only by stubborn resistance to truth could I fail to extrapolate from those one very simple and easily demonstrable fact: white people, especially white people who are male, benefit from centuries of White Privilege that has been enabled, established, entrenched, and empowered by war and conquest, and since the European colonialist expansion nearly always employing an underlying discourse of superior/inferior, can/can’t, Us/Them— all wrapped up in the skin called “race.” We receive this benefit, to a greater or lesser degree, regardless where we are, every waking hour of every day of our lives.

Specifically: I have been given unemployment insurance and food stamps on my word that I was looking for work; student loans because my parents and grandparents were “established upstanding citizens”; “just a warning, this time” because I look like the cop’s own son; access to Canadian health care without showing citizenship/status ID… and many more examples than I could possibly recall or enumerate. Moreover, I have stood, as a white boy in Africa, in a sea of black faces and felt the invisible protection of my embassy and hundreds of years of colonial authority—even in one of the only two African nations that was never colonized by a European nation! I know that I can carry Skittles anywhere, any time of the day, without fear. I know that I can never experience full-tilt racism because I can easily overcome isolated incidents of discrimination.

By contrast, my first anthropology professor at John Abbott College, when writing his thesis, had lived for a year in Winnipeg as a native American, on a reservation. I believe he can speak to racism from genuine experience. But, unlike his hosts, he could at any time take that skin off and walk away.

My academic understanding of the history of this topic is contained in three essays I wrote at grad school: in Shakespeare’s time Othello’s blackness signified he was foreign, and his foreign-ness permitted his enslavement, but it did not prevent him from marrying and achieving outside this description. Before there were black-skinned slaves there were Irish indentured, and they were compared to apes and monkeys—pathologized, made inferior and subhuman by rhetoric and repetition of false memes. A recent naive and completely insupportable assertion out of some corners—that racism “was over in the 60s”—is well studied in the social science of anthropology, and better understood as “color blindness” and “whitewashing.” This means that discriminatory behaviours and attitudes have become faceless, systemic, and institutionalized. Many people, and perhaps most Americans believe “race” is exactly equal to “skin color” and nothing more. They say such things as “some of my best friends are black!” and quickly change the subject, often to all the reasons racially-based fears are “justified” they could be racist… but of course they’re not, see said “friends.”

Racism is inherent in the rhetorical workings of “racializing,” whereby we might evoke the deep-seated pathologies of our racist history by referring to a nationality or a religion as, for a simple and incomplete example, “the Irish race,” or “the Jewish race.” In so doing we instantly ascribe characteristics and stereotypes to that group and imply a biological imperative. For references, citations, explicit examples, and more complete arguments please read my three essays and the works cited. They’re posted here so you can read them in the order they were written2. But while knowledge of the biology and history of race and racializing discourses can lead to awareness of problems and recognition of privilege and power given or withheld… only by listening and speaking each others’ languages—with deep inspection of cultural symbolism, idiom and metaphor—can we begin to transform the narrative into one that fosters inclusion and equity.

The Trayvon Martin case was entirely about race, top to bottom, inside out, backwards and forwards. It was about race-based prejudice, the racialization of apparel, walled communities, about who gets to bear arms, about who gets to “defend” themselves, and from whom. The Defense likely could not have won had “racial profiling” been allowed—so they quickly denied any mention of the phrase… and the State played right along. Whether George Zimmerman is “a racist” or not is a meaningless diversion; his actions and the context in which he acted are all very deeply infused with racism and privilege. The verdict, say many, was predetermined—prescribed by the instructions to the jury. I did not need to wait weeks for lawyers to suggest the prosecutors threw the trial, their insincerity was apparent. I saw the whitewashing they gave the trial and verdict moments after it was announced. “We tried. The ‘facts…’ The jury has spoken.” Such gross moral failure is heartbreaking.

Sign:
“Change for Trayvon: Stand Your Ground laws must be reviewed“

Academics and professorial types aren’t special, they don’t believe they have all the answers, they just read a lot. Isn’t their role in fact to ask better questions? Then isn’t it up to all of us to find better answers?

† Corrected 2013-08-16: My father points out his mother was certified as an elementary teacher by virtue of the standard 2 years of training at Montclair Normal School, now Montclair State University. All four of my grandparents had higher education.

A Life Exposed, by Caroline Elkins, book review of AFRICAN QUEEN – The Real Life of the Hottentot Venus. By Rachel Holmes.

“Concerning Violence,” from The Wretched of the Earth by Frantz Fanon, NY: Grove Weidenfeld.

‘Shadism’: colour prejudice is far from being black and white, blog post by Vanessa A. E. Brown November 24, 2011.

2 thoughts on “White Privilege—how I “get it””