Synopsis I was pretty excited when I found the WordPress smart phone app and saw it gives the user the ability to shoot and add images and video instantly, straight from the phone. My excitement quickly faded though, when I viewed the post in Firefox from my desktop. The app will upload a QuickTime .mov file, which can only be viewed in Chrome and Safari. Even with a browser that can view the file, if it’s rotated then you have a sideways video.

I also learned a great deal about the HTML5 video tag — and its limitations. You see the post pretty much as it was delivered by WordPress iOS, but I also added one of my custom rollovers containing a better video produced from screencasting (Camstudio 2.6) with an overdubbed narrated script (Audacity 2.0) and some text overlays (Vegas Movie Studio 10.0), uploaded to YouTube and embedded as an iFrame. YouTube will convert and serve the right video format for the device requesting it, which is reason enough to choose this method, but it also lets you upload your narration as a plain text “Transcript file” and it will convert it to subtitles. Very cool!

This post is from my iPhone using the new WordPress iPhone app. It’s set up for an account on WordPress.com by default, but you can easily change it to a self hosted one if you have one… and if you’ve “enabled XML-RPC publishing protocols” Say what!!?? 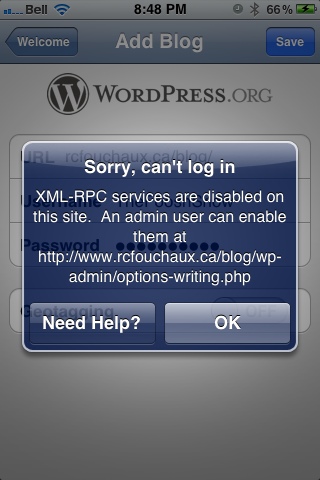 That’s not nearly as scary as it sounds. WordPress URLs always convey a strong hint as to where they lead, so wp-admin/options-writing means log in to your dashboard and look under Settings (where program options are listed) for something about writing… and there it is:

[Update: So this looks like a show-stopper! Unless there’s an app on the iTunes store that converts MOV to MP4 you can’t post video directly, you have to take it off the phone and convert it, or upload it to YouTube etc. and link it. I found Convert Videos from Ice Cold Apps for $3.99 and learned it works by uploading to the cloud, converting and downloading again–so you’ve got data charges to think about. I also plan to look for a plugin, but most players I’m aware of that handle MOV are Flash-based and wouldn’t play on the phone! Updated again: The MOV does in fact display and play on the iPhone itself, but that might even be worse if I thought I submitted something and no one w/o an iPhone or iPad.]

The WordPress iPhone (or Android) app gives very quick access to the world from wherever you happen to be with your iPhone. (Most likely you’ll want to store that video at least until the nearest coffee shop with free wifi, but that’s okay, you can do that!) What might a classroom blog look like if all those science labs were chronicled on line? Drama rehearsals? Documenting of experiences in general …easier, therefor potentially more likely to happen? Does quality suffer, and if so is that a big problem? Will I ever be comfortable posting my tongue-tied stuttering without retakes and edits?

I’m interested in your answers and your additional questions, what do you think?