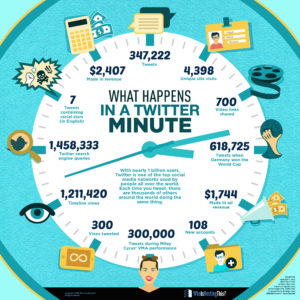 Mor Naaman, Jeffrey Boase, and Chih-Hui Lai of Rutgers are on the list of researchers who’ve published early about Twitter. Naaman, Boase and Lai (2010) bring interesting new terminology to the table, casting Twitter as a member of a class of software described as “social awareness streams” Three things distinguish a social awareness stream from other communication: “…a) the public (or personal-public) nature of the communication and conversation; b) the brevity of posted content; and, c) a highly connected social space, where most of the information consumption is enabled and driven by articulated online contact networks.” (pg. 189). Does property “c” include “Personal Learning Networks (PLNs)?”

…we use Ward’s linkage cluster analysis to categorize users based on the types of messages that they typically post. … The analysis resulted in two clusters, which we labeled “Informers” (20% of users) and – to suggest a new term – “Meformers” (80%).
Naaman, Boase and Lai (2010, pgs. 191-2), emph. mine

The researchers asked, 1) What types of messages are commonly posted and how does message type relate to other variables? 2) What are the differences between users in terms of the types and diversity of messages that they usually post? 3) How are these differences between users’ content practices related to other user characteristics? The entire study is worth a look (link below), but a summary here might be a good influence on the types of Personal Learning Networks we create.

Messages fit into 4 categories: “information sharing (IS; 22% of messages were coded in that category), opinions/complaints (OC), statements (RT) and “me now” (ME), with the latter dominating the dataset (showing that, indeed, “it’s all about me” for much of the time). Overall messaging divided into 2 types, “Informers” (20% of users) and then Naaman, Boase and Lai suggest a new term: “Meformers,” into which fall the Tweets of 80% of the users in the study. [The Figure] shows the mean of the average proportion of messages in the top four categories for each user” (pg. 191).

What else do we know?

Tony & Rachael Lowe have done a Twitter in learning and teaching – literature review collecting what we’re learning about Twitter in one place. They highlight in particular one by Reynol Junco, C. Michael Elavsky, and Greg Heiberger (2012), Putting twitter to the test: Assessing outcomes for student collaboration, engagement and success in which they show that faculty participation on the platform, integration of Twitter into the course based on good theory-driven pedagogy, and requiring students to use Twitter are key to improving outcomes that I intend to review on its own soon.

Here are some of mine:

Are these numbers still true in 2013?
Are we informers sometimes and meformers the rest of the time?
Are there other “clusters” to be discovered?

Please use the comments and ask some of your own questions here!