I’m very interested in taking elearning to new places. Elearning is not a noun, it is “to learn” using tools and environments enhanced by electronic technologies. The mere use of technology, electronic or otherwise, does not assure learning takes place — far from it. Too much of what we call elearning can be all too thoroughly described as automated PowerPoint. Now, I have ideas and long range goals for elearning design that may preclude PowerPoint entirely, but if the previous sentence is true, or even if you use PowerPoint only occasionally, or in some small phase of storyboard development, then anything you do to improve what you do with PowerPoint should improve your final product, right? Understanding when to employ an assertion-evidence model in any lesson or presentation is a step towards creating better learning experiences.

Michael Alley at Penn State advocates utilizing “an assertion-evidence structure” with PowerPoint “in which a sentence headline states the main assertion of the slide. That headline assertion is then supported not by a bullet list, but by visual evidence: photos, drawings, diagrams, graphs, films, or equations.” He provides models & templates and supporting research (specific subjects in higher education; I’m contemplating much broader applications). While thinking how this structure might inform the use of slides in our next elearning module I’ve been attempting to incorporate the approach into live presentations and I’ve noticed at least two things: for one I feel the presentations can take on an additional air of authority, resulting in higher impact, and second, it’s more important to know your topic well. You’ll need to be able to describe and discuss the relevance of the evidence you choose to support your assertions, which may require a different skill set than following bullet points.

I’ve found it well worth the effort. The first time I tried it my presentation shrunk from 9 slides to 5 including Title page, required less time to make the point and resulted in an engaging audience conversation that used the extra time to greater reward for everyone. Using this model does not require you to use it with every slide or to stop using nested bullet lists completely. You can start by thinking in assertions wherever you really want to make a point… instead of typing “The Seven Essential Elements of Democracy” followed by a list, say “By international consensus there are seven elements essential to democracy…” and show the cover of the report(PDF), with a link. 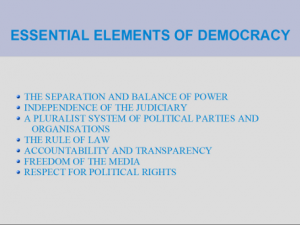 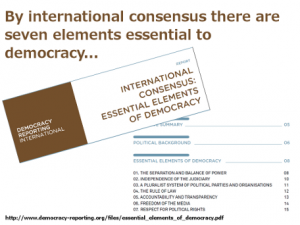 This assertion-evidence design demands much more from the presenter than simply following the defaults of PowerPoint. For one thing, identifying the main sentence assertion of each slide requires more thinking than simply identifying the slide’s topic word or phrase. In addition, coming up with cogent visual evidence to support each assertion is more demanding than coming up with a bullet list of subtopics for each slide topic.
-Michael Alley

How early might this model be introduced? I think the assertion-evidence model is fundamentally good teaching practice in that it models a dialog in which assertions must be supported by evidence. Michael Alley restricts his assertions regarding the superiority of this method to the situations and subjects for which he has evidence to support them. But what if the science and engineering students professor Alley gets to teach in university come from a culture of learning where arguments have always been evaluated upon the merit of supporting facts and evidence? Where evidence can be questioned and its relationship to the facts established, possibly refuted, or reinforced? Might early exposure to information exchange based on such an assertion-evidence model, practised over a significant amount of time and a wide range of topics, as a matter of routine let’s say …have any long range effect on society?
–